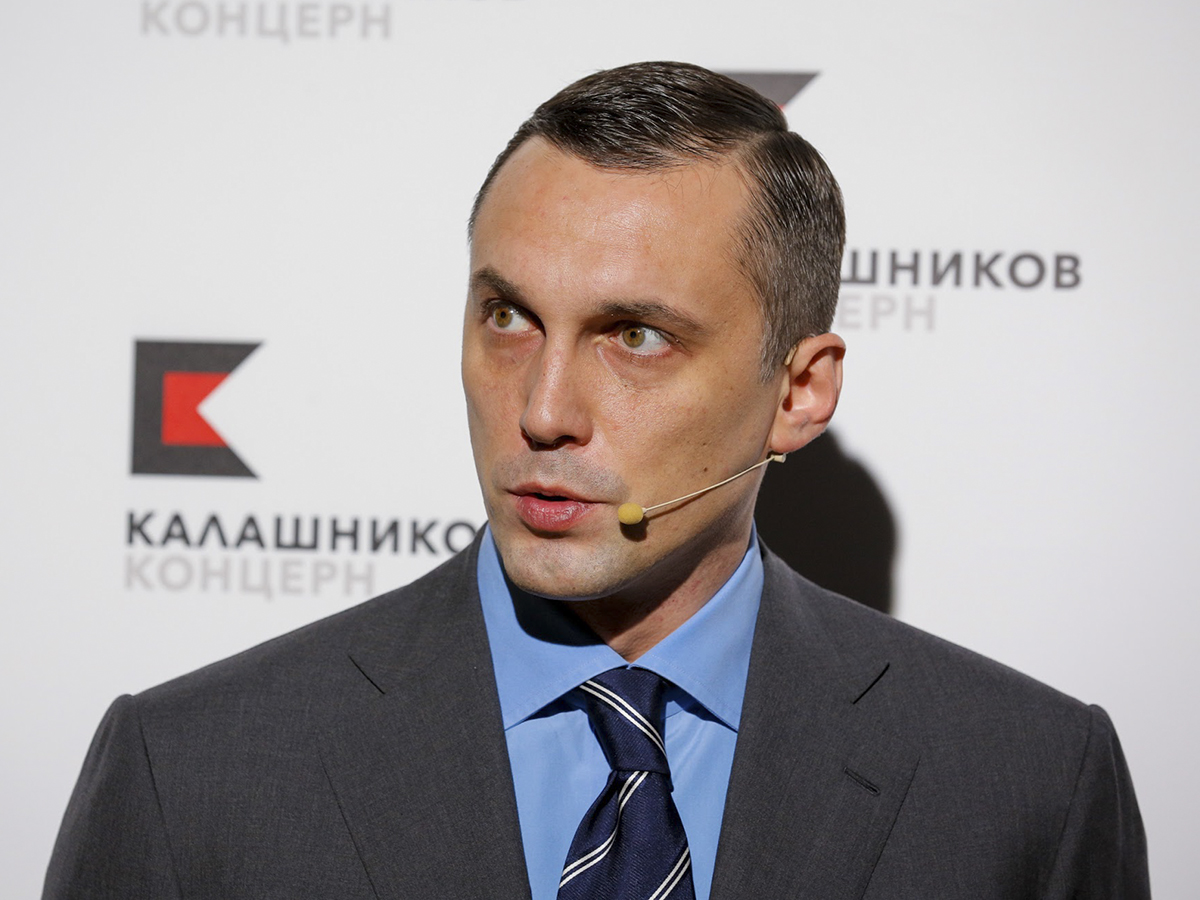 CEO of Concern Kalashnikov, Aleksey Krivoruchko, spoke in an interview with Vesti.ru about how sanctions have affected the work of the company, which, despite the sanctions being in place, has managed to increase its production capacity, and about the newly reshaped global geography of the weapons purchasing market.

- Earlier you mentioned the launch of boats and drones. What is the volume of investment in these areas?

- The amount of investment will be approximately 700-800 million rubles for the two companies. We purchase a share in the assets of the already existing companies, which are promising and already present in the market. We believe this investment will be very promising, since it is an area that we are seriously pursuing.

- In your opinion, why is there such an interest in these particular areas?

- With regard to the boats, this niche is still quite reasonably free. They are light, small boats, and we believe that this niche is going to develop further, both for the Defense Ministry and for other customers, including those in the civil field. And also, we are considering installing weapons of our production on these boats.

Our program will increase due to currency exchange rates. Originally it stood at 5 billion rubles. Now it will be no less than 6 billion rubles

- As far as boats and drones go, who are your main customers?

- We are currently working on exporting boats and drones, and we hope and believe that there will be many export orders.

- Who else are you looking at as potential buyers in the long term?

- There’s EMERCOM, and Customs who were buying and will continue to buy, and, of course, the Ministry of the Interior. Therefore, we believe that there is a great potential for development.

- What kind of return on these investments do you expect?

- We expect to fully recoup this investment within three years.

- Our experts believe the way for the Concern to reach its past capacity is now possible by expanding and updating the range. What other projects can be expected in the near future?

- Our primary area of activity, is, of course, small arms of various calibers, and we are conducting more development in this field, with already more than 40 works in progress, and many of these works we will showcase this year at the "Russian Army" Expo in the Maritime Defense hall of the exhibition. Therefore, we have a lot to do, and you are absolutely right, without modern, new developments, it is, of course, hard to expand to larger volumes of production and sales, including abroad. The investment program, which was around 5 billion rubles, will increase in the overall amount, primarily due to currency exchange rates. And we now know that it will be an investment of at least 6 billion rubles. Approximately one and a half billion has been invested last year, and about one and a half billion will also be invested this year, meaning that, in regards to the investment program, we are not making any reductions. So far, we have a situation that allows us to save on all volumes.

We have no personnel reductions, and instead have increased production by more than half this year, compared to 2014.

- Are there any other areas for reducing costs, as far as you know, within the company?

- The Concern has a lot of experience in reducing costs, due to the fact that for many years there was no new technology, or for that matter, new equipment. And today we already have a great example: we changed out 30 machines for one machine, which is much more technologically advanced. And, of course, there is the transition to new technology when it comes to metals that can save tens or even hundreds of percentage points in costs. This is one of the key areas where we are seeing positive results.

- So, as it turns out, you are reducing costs through investment and through the purchase of new equipment?

- Partly so, even though up to now the Concern has been profitable, but it is impossible to acquire new machines and technologies without making the necessary investment. However, for now it has a strong effect, and today we were able to increase production by more than double over the previous year, in comparison to 2013, proving that, in that regard, it is working.

- So the main effect is already visible. But what is the main result that you are aiming for?

- We are planning very seriously to reduce our costs, both in production and overhead costs. We expect to finalize our investment program in 2017.

- Nowadays, many companies are trying to reduce personnel, how do you see your future staffing concerns?

- We are not planning any reductions, there are even jobs available for hiring - mainly for workers. We were able to expand the overall enterprise by expanding our exports. We have our orders. We have a large order from the Defense Ministry, and therefore, we have no plans to implement cuts, and instead, we expect a production increase even two times greater than the growth of 2014.

- How have sanctions affected the work of Kalashnikov Concern and what results have you achieved during 2014 ?

- They really had a huge affect upon us. Of all the companies that were targeted on the sanctions list, we were the only one that had almost 80 percent of products that were exported to the United States market - they were our civilian weapon sales. For us, this was certainly a serious blow. But thanks to the work with our colleagues at Rosoboronexport and other companies, we were to completely replace these volumes. And as I said, in 2014, we increased the volume almost two-fold compared to 2013 - despite the sanctions. So this is one of our, let's say, problem areas.

The second issue, which is also connected with the sanctions, it that it has become difficult to obtain foreign exchange transfers from customers. Banks are afraid to cooperate with us, which created a number of difficulties.

And the third area, which is also affected by the sanctions, is the supply of equipment. Equipment from European or other manufacturers. You may buy equipment from a European manufacturer, and then, for reasons beyond you, they refuse to supply spare parts or other services. For us, this was, of course, a bit of a kick and a lesson learned, so now we go to Russian manufacturers for machine tools, and as of right now, the industry is actively developing. We also work with Asian producers.

- Some people believe that 100 percent import substitution is impossible. As far as the Concern goes, do you imagine making it happen?

- In our case, thankfully, it is entirely possible to pull it off, thanks to our partners in Asia. To date, we have had cases of refusal to supply equipment, and it is only caused a negative impact in regards to the image of those companies.

Almost 80% of the products were shipped to the United States, so the sanctions and closing of this market was a serious blow for us, but we were able to completely replace these volumes

- What is the current ratio between imported and domestic equipment?

- Not all equipment is made in Russia - but around 15-20% we purchase from Russian and Belorussian manufacturers.

- At what prices are you now having to buy imported components and how have they changed after the imposition of sanctions?

- In rubles, it is certainly more expensive, but these are very good quality products, which are still much cheaper than the European ones.

- You say that previously Kalashnikov Concern had 80 percent of its sales coming from the United States. Who became the new buyer that filled the void?

- A year ago, we had 80 percent civilian weapons being sold. Then, due to the ban, we had to reorient our civilian market, and, of course, we had to refocus our strategy and production. And today we have realigned 80 percent of our production to military weapons. In this area, the main customers are Africa and the Middle East, as well as South East Asia, Latin America, and the countries where we have been able to significantly increase sales by working with Rosoboronexport.

- When you were talking about drones and boats, you mentioned purchasing of companies. Do you have any such purchases planned for the future?

-Indeed, these options are not excluded - they are definitely being considered fully. We have already conducted a detailed study of purchasing abroad, however, because of the sanctions, we have suspended it for now and hope that it will soon come back online.

- What are the financial goals and objectives of Kalashnikov Concern for 2015?

- As you already know from the Company’s reporting statement for 2014, we carried a net profit. It was relatively small at 88 million rubles, but this was a very positive result, considering the imposition of sanctions. This year we plan to significantly increase net income and revenue, so we have great confidence in the future.

- Significantly, by how much?

- We have a number of contracts that we have to implement. There are a number of difficulties involved, but we are planning for an increase of up to 15 billion rubles in the near future, compared to 4 billion in the past.

Kalashnikov will participate in the IWA-2015 exhibition