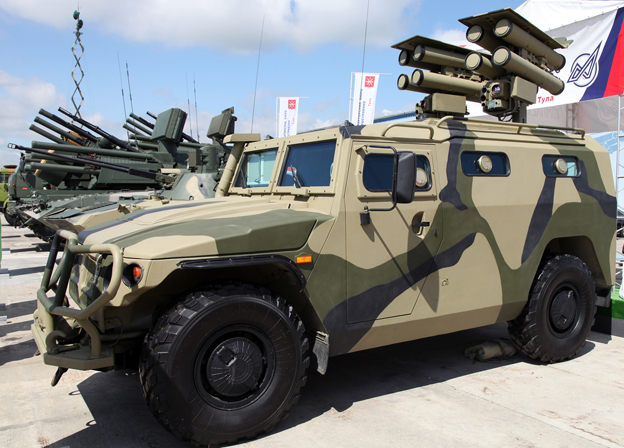 The Russian joint exposition at the 13th International Defence Exhibition IDEX 2017 in Abu Dhabi includes over 750 samples of weapons and military equipment for land forces, air force, navy, as well as air defense troops. The joint exposition is organized by Rosoboronexport (a part of the state corporation Rostec).

“At IDEX Russia has an opportunity to demonstrate its latest developments in production of weapons and military equipment, as well as to conduct negotiations and establish cooperation with traditional partners from all over the world, including the Middle East, being of particular interest for the Russian industry,” said CEO of the state corporation Rostec Sergey Chemezov.

The exhibition will feature the world premiere of an automated control system for air defense missile brigades Polyana-D4М1 combining all the types of air defense systems into a single command information system and distributing dozens and hundreds of air targets among various air defense systems. It will be presented by Russian Electronics.

Uralvagonzavod, which was transferred to Rostec in 2017, presented a new 30-millimeter remotely-controlled weapon station (RWS) consisting of an automatic cannon and a tank machine gun and allowing to find targets at any time of day or night. Another novelty will be a mortar gun 2B24 installed on a utility terrain vehicle and a noiseless mortar gun 2B25 for special forces.

High Precision Systems brought to IDEX 2017 samples of antitank systems Kornet-EM and Metis-М1, with missiles breaking through the armour steel with the thickness of more than 1 meter. It will also present an extended-range guided projectile Krasnopol-М2 with laser-guided target homing, as well as the Gran system for rifled and smoothbore mortar guns. The exhibition guests will also be able to see an amphibious machine gun ADS with the caliber of 5.45 mm designed for land and underwater firing.

Tecmash presented an unparalleled rocket-propelled grenade with a grenade launcher RPG-30. It fires targets equipped with add-on reactive armour and active protection system. One more novelty is a model of fuel-air explosive aircraft bomb ODAB-500 PMV. It outstrips all the similar weapons in this caliber.

The key exhibit among ammunition for tank, field and naval artillery will be a round 3VBM17 with an armour-piercing composite shot being one of the most powerful rounds for modern tanks Т-72 and Т-90. The shot is of special interest for IDEX 2017 visitors, since Т-90 was the best-selling tank in the global market from 2001 to 2010.

Russian Helicopters surprised the exhibition visitors with attack helicopters Mi-35М and Mi-28NE Night Hunter noted for increased survivability and a powerful system of weapons able to stand against tanks, infantry combat vehicles and anti-aircraft defenses. It also presents a scout-attack helicopter Ka-52 Alligator, for which the first export contract was received in 2016. There are also some civil models presented: a multipurpose medium helicopter Mi-171S and a light helicopter Ka-226T.

The Russian exposition will also show reputable novelties of the defense industry that appeared during the last few years: samples of military and non-military small arms made by Kalashnikov Group, Т-90MS being the best tank in the world in terms of total indices and cost effectiveness among those offered today in the global arms market.

Rostec will also present information about an unparalleled air-defense missile system S-400 Triumph, which is considerably superior to the US air-defense systems Patriot, as well as about Antey-2500, a multipurpose fighter aircraft Su-35, a combat-capable trainer aircraft Yak-130, air-defense and antitank missile systems Pantsir-S1 (already ordered by the UAE) and Tor-М2КМ.

Rostec is a Russian corporation, created in 2007 to promote development, production and export of high-tech industrial products for civil and military purposes. It is comprised of over 700 organizations, which form 9 holding companies in the military-industrial complex and 6 in civilian industries, as well as 32 organizations under direct management. Rostec portfolio includes such well-known brands as AvtoVAZ, KAMAZ, Concern Kalashnikov, Russian Helicopters, VSMPO-AVISMA and others. Rostec organizations supply to and operate in over 70 countries. Consolidated revenues of Rostec companies in 2015 exceeded 1.14 trillion rubles (over 19 billion USD). According to the new Rostec strategy, the main objective of the corporation is to provide a technological advantage to Russia in highly competitive global markets. The planned investment volume for the development program until 2025 is over 4.3 trillion rubles (over 70 billion USD).