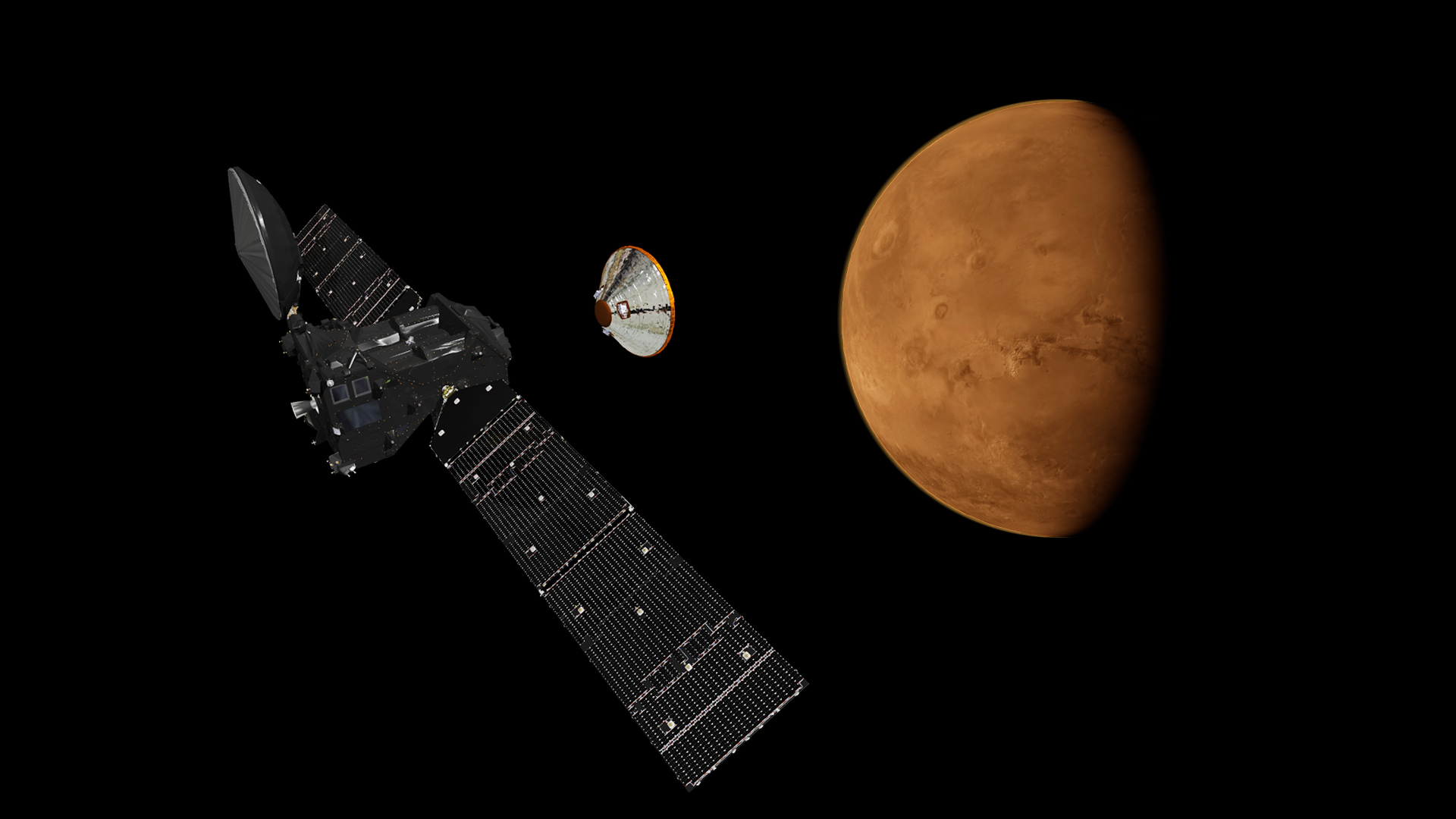 Russian and European collaboration «ExoMars» is preparing for its main mission – searching for traces of the past and present life on the Red Planet. European Space Agency produces a mothership and Mars rover vehicle and Russia produces a landing module and landing platform. Russian launch vehicle “Proton-M” will send up all this to the space.

Starting as planned on July 25, 2020 the station is to reach the destination on March 19, 2021. One of the main conditions for soft landing to the surface of Mars is a protective screen of the landing module made of special composite produced at ORPE “Technologiya” which is a part of Rostec.

«ExoMars» is a project of European Space Agency (ESA) and ROSCOSMOS on exploration of Mars, its surface, atmosphere and climate from the orbit and on the surface of the planet.

Since the early 2000s “ExoMars” has been developed as collaboration of ESA and NASA. It was meant that Americans would provide two rockets Atlas to launch two missions and also would participate in engineering of the Mars rover vehicle. However in 2013 NASA terminated its participation in the project due to reduction of the budget. ROSCOSMOS has substituted NASA. In the scope of the project the Russian side will develop a landing module with a landing platform and the European side – a mothership and Mars rover vehicle.

It is assumed that the main scientific mission of «ExoMars» project is searching for the spark of life on Mars in the past and present. But it’s not the only mystery of the Red Planet to be cracked by «ExoMars». The aim of the project is also exploration of aquatic / geochemical material both on the surface and in planet interior. As it is known water on Mars is no longer a myth. First its existence was declared about twenty years ago. All this time water on Mars has been studied from the surface and mapped. And last July the first perennial impounded body was declared: MARSIS radar discovered a lake on Mars at the depth of 1,5 Lm under ice of Southern Polar Cap.

Today there is a mystery no less important – Martian methane. For the first time scientists reported about methane on Mars in 2003. This gas was detected in a negligible concentration and the total volume released corresponded to 42 thousand tons of gas. To put that in context it is approximately one third of an average gas tanker.

In 2012 American Mars rover Curiosity conducted the first research and determined that there was no methane on Mars. But approximately in a year Curiosity again recorded the presence of methane in the Gale Crater. So the study of methane as well as other trace gases and their sources in the atmosphere of the Red Plant is also one of the key missions of «ExoMars».

The first stage of «ExoMars» program started in 2016 just with the goal to solve the methane puzzle. At that time “ExoMars-2016” station was launched from Baikonur Сosmodrome . It consisted of a research orbiter - Trace Gas Orbiter (TGO) and demonstration lander module - Schiaparelli. Schiaparelli module was to practice the technology of atmospheric entry, descent and landing on the planet surface before launching the second stage of the mission but it failed to make a soft landing successfully and crashed.

In April 2018 TGO started implementing its scientific program, successfully transmits images of the Red Planet and now it is waiting for its main mission - to start functioning as a retransmission station for the Mars rover and automatic research station within the frames of the second stage of «ExoMars».

Initially the start of «ExoMars» second stage was planned on 2018 but later the launch was postponed for two years. Specifically this stage is considered to be the main one in the project and designed to help to find the answer to the question whether there is life on Mars.

As a part of the second mission it is planned to deliver the Russian landing platform and European Mars rover to Mars on the mothership developed by ESA. The mothership allows the transfer along the route Earth-Mars and entry of the landing module into the atmosphere of the planet at a speed of approximately 5800 m/s. The landing module performs braking in the atmosphere and descending of the descent module to the surface of Mars as a part of the landing platform and Mars rover vehicle.

While entering Martian atmosphere the Russian landing module is protected by a special screen made of “cosmic” composite – lightweight and durable material which is called fiber-glass plastic. This material withstands strong vibration, extreme temperatures and at the same time weighs a little. The protective screen is produced at Rostec enterprise – ORPE “Technologiya”. 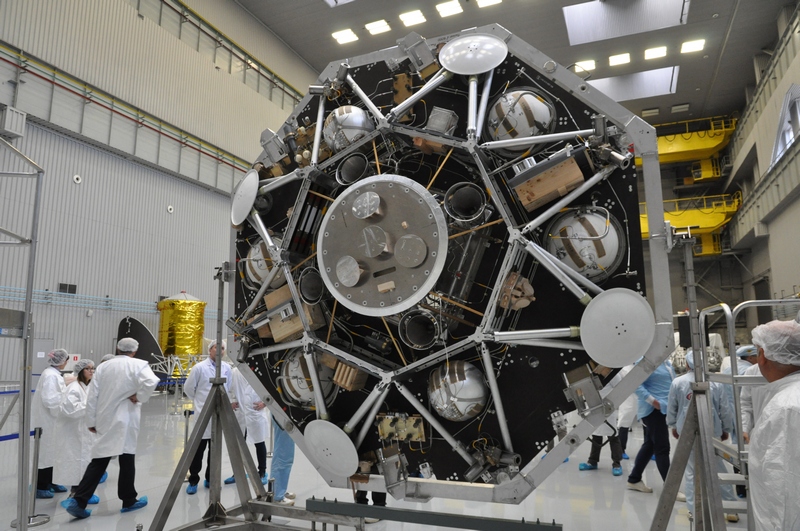 As they declare at the enterprise the work under project «ExoMars-2020» is proceeding according to the plan. Large-sized structures from polymer composite materials have been developed for the landing module and landing platform. Totally the program provides for development of four sets – three sets for testing and a «flight» one. 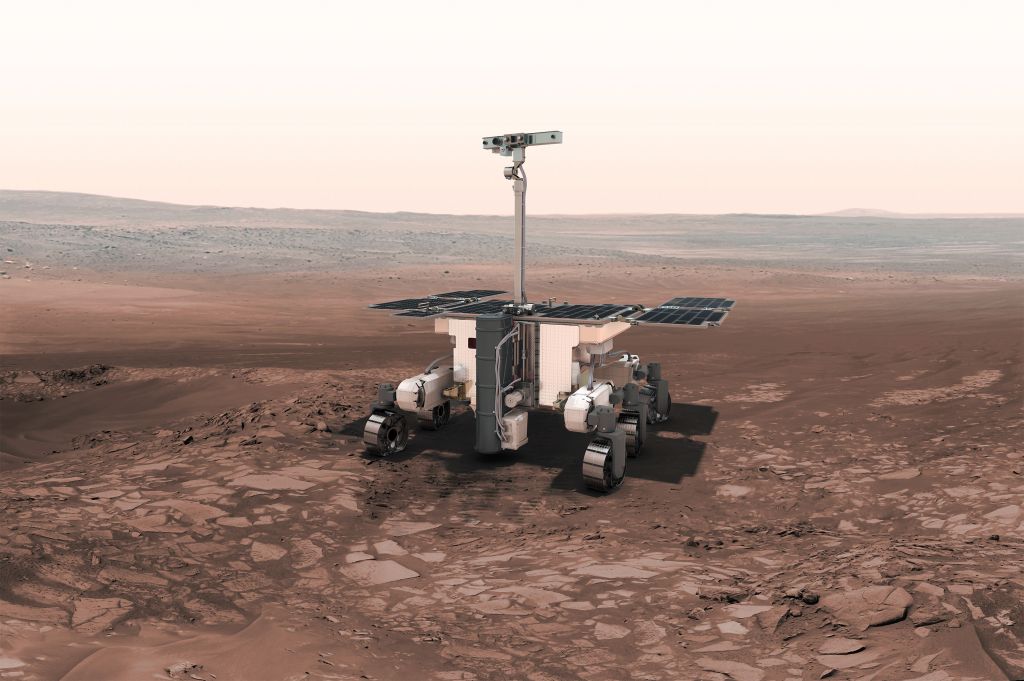 Further the Mars rover and landing platform will operate autonomously transmitting telemetric and scientific information to Earth via TGO orbital module which is already in Martian orbit.

The six-wheeled European rover with the weight of about 350 kg is designed to work on Mars for seven earth months. It can travel up to 100 meters per day and must cover several kilometers during this time. For the first time this Mars rover will search for molecular biological signatures in the subsurface layer of the Red Planet.

After the rover exit the Russian landing platform of 828 kg weigh will operate as a long-lived autonomous scientific station. It is scheduled to work on Mars for about a year. A complex of scientific hardware will be installed on its board to study the content and properties of the planet surface. A total of 13 scientific instruments are to be installed including two European ones– LARA (radio experiment to research the interior structure of Mars) and HABIT (experiment to search potentially habitable zones, liquid water, UV radiation and temperatures studies).