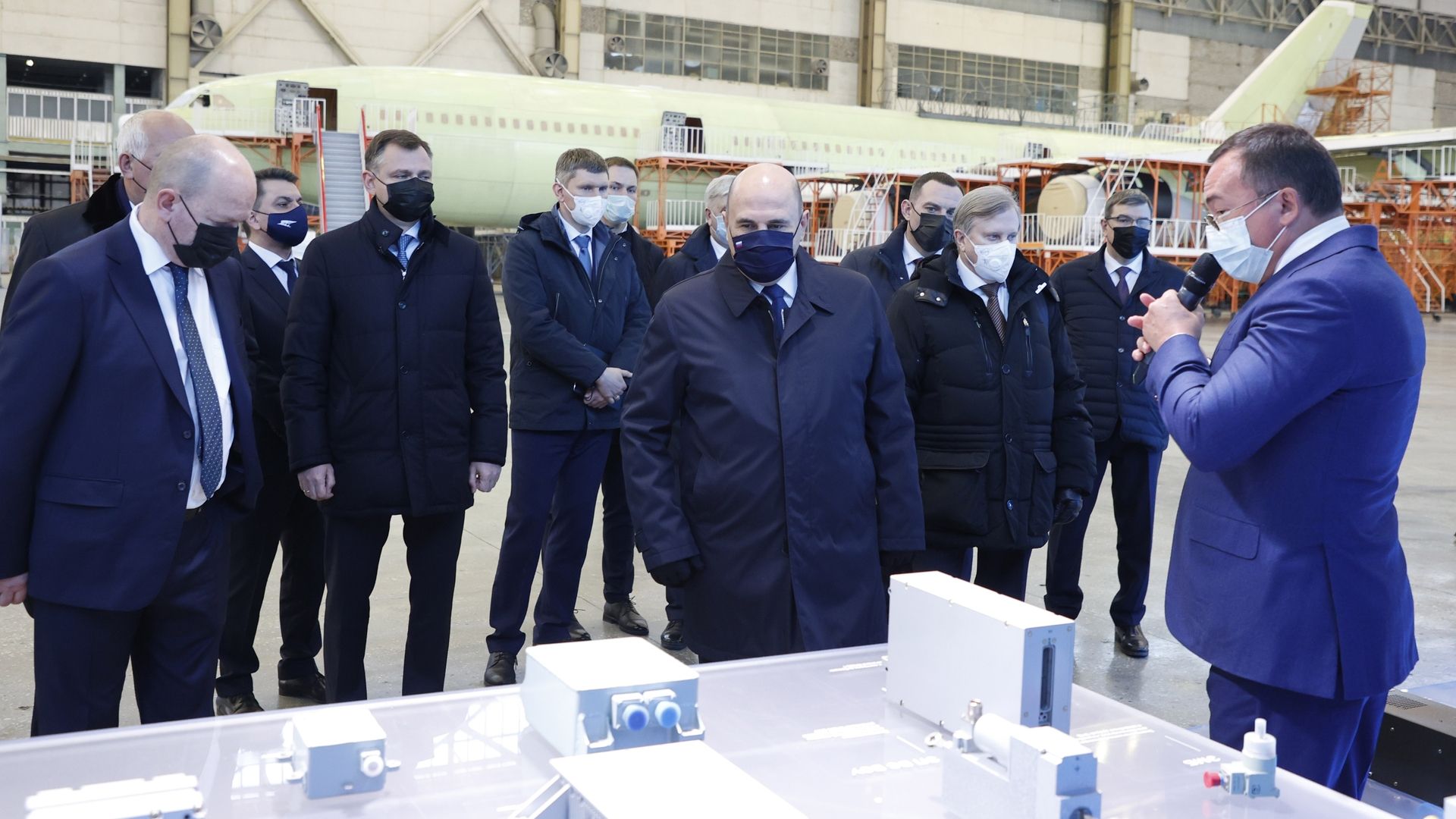 Photo: Press service of the Government of the Russian Federation

Today Russian Prime Minister Mikhail Mishustin visited the IL-VASO branch of the United Aircraft Corporation during his working trip to the Voronezh region. The Prime Minister inspected the final assembly shop, where the IL-96 planes are now located, and had a conversation with the workers of the plant.

Voronezh Aircraft Plant is the only enterprise in the country that has the competence to build long-haul wide-body passenger aircraft. The IL-96 project now provides the bulk of VASO's workload. The enterprise also participates in other UAC civil programs, such as SSJ100, MC-21 and IL-114 by producing pylons, engine nacelles, tail and wing elements. Wide cooperation of Russian manufacturers of aviation systems and equipment, many of which are members of Rostec State Corporation, was demonstrated to the Prime Minister.

The Prime Minister also visited the flight test station, where he boarded a new Russian medium-range aircraft MC-21-300 and toured its passenger cabin, which is particularly comfortable due to a wider fuselage compared with other aircraft of this segment. Yesterday MC-21-300 flew from Ramenskoye Airport (Zhukovsky) to Voronezh.

It is worth mentioning that at the end of December MC-21-300 received a type certificate from the Federal Air Transport Agency. The supply of these planes to the Rossiya Airlines is scheduled to begin this year.

After a tour of the production facilities, a meeting was held on the development of civil aircraft and the renewal of the civil aviation fleet of Russia.

Among the key tasks outlined by the Prime Minister of Russia was to increase the share of Russian aircraft in the fleet of the country's largest airlines to 30% over the next nine years. At the same time, the pace of construction of civil aircraft in Russia should exceed one hundred units per year in five years. According to Mikhail Mishustin, this will allow the United Aircraft Corporation to increase the share of high-tech products to 50% by 2030. “It is important that Russian aircraft be both reliable and competitive. This is another strategic task that the President has set for us. The necessary funding is allocated. The three-year federal budget provides for more than 122 billion rubles as part of the state program for the development of the aviation industry,” said the Prime Minister.

Oleg Bocharov, the Deputy Minister of Industry and Trade of Russia, made the keynote speech. He spoke about the implementation of key civil programs.

Based on the results of the meeting Mikhail Mishustin instructed relevant agencies to prepare suggestions on the expansion of the state support mechanisms for the civil aircraft industry directed at the renewal of the airlines' fleet. Another instruction concerned the developers of domestic components. “The Ministry of Industry and Trade, together with colleagues from Rostec, needs to conduct a comprehensive analysis and inventory with import-substituting components for both MС-21 and Superjet. Please evaluate the readiness of the developers and manufacturers for serial supply of these components and equipment taking into account the volume necessary to organize the scheduled production of aircraft and, most importantly, the after-sales service," concluded the Prime Minister, addressing the participants of the meeting.