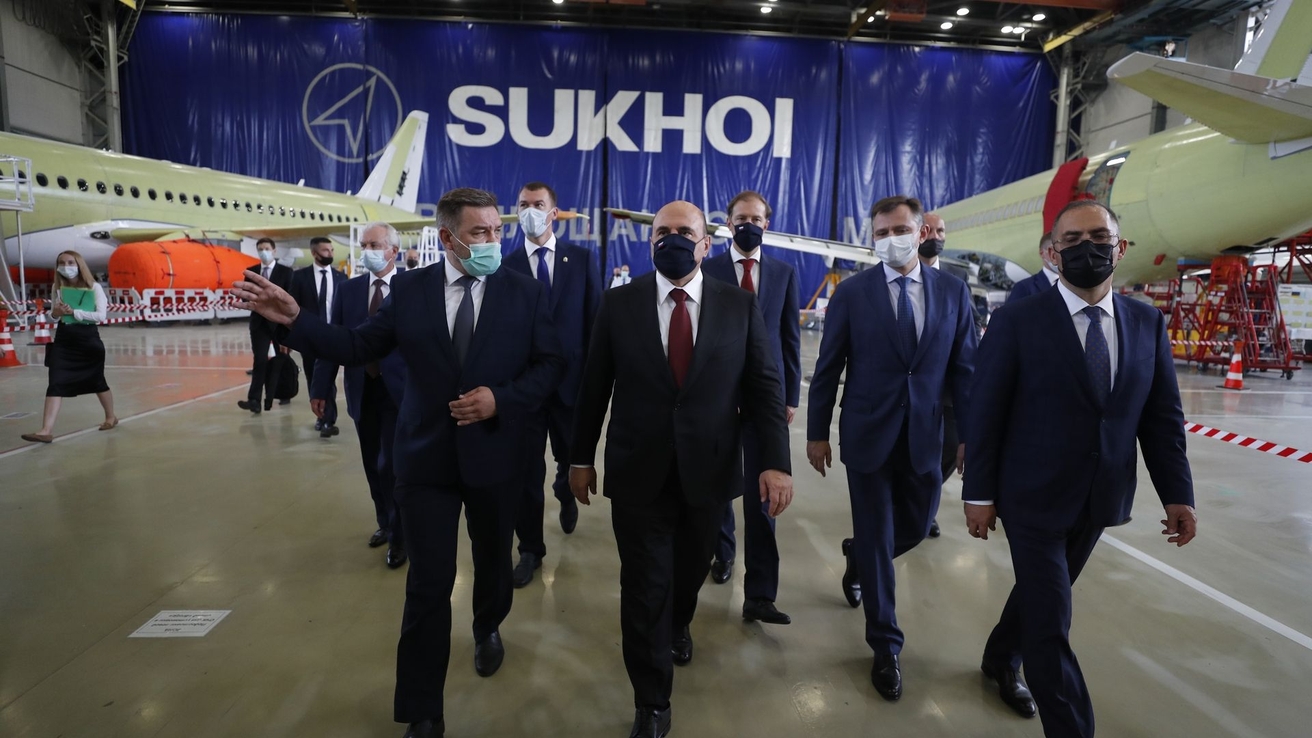 Photo: Press service of the Government of the Russian Federation

On July 28, the Russian Prime Minister Mikhail Mishustin inspected the production facilities of the United Aircraft Corporation (PJSC UAC, part of the Rostec State Corporation) located in the city of Komsomolsk-on-Amur. The event was part of a larger official visit to the Khabarovsk region and was also attended by the Russian Minister of Industry and Trade, Denis Manturov.

The Prime Minister was introduced to the production process of Superjet 100 aircraft: he visited the wing aggregate assembly and final assembly facilities, flight test station, and also boarded a freshly built model, inspecting the cockpit and passenger cabin.

General Director of UAC Yuri Slyusar told Mishustin about the development prospects of the Superjet program. Currently 155 aircraft are operated by different airlines, and their number will increase by the end of the year. At the MAKS-2021 air show, agreements were signed for another 58 aircraft. Some of them will be supplied to improve transport accessibility to several cities in the Far East and will be oper-ated by the Aurora airline.

The director of the plant, Alexander Pekarsh, reported that decisions made at the state level have al-lowed to support the company with a steady flow of orders until 2028. Over the past five years, KnAAPO has undergone a significant modernization and production overhaul program, improving its capacity for serial production of high-tech aircraft. Modern technologies and new equipment have ensured a com-plete renovation of the production base of a number of workshops. In particular, a new robotized work-shop has allowed using electroplating process to more effectively apply radar-absorbing coatings to Su-57. New assembly lines for Su-35S and Su-57 were put into operation, allowing to organize more effec-tive mass production output.

Mikhail Mishustin also held discussions with visiting students as part of the inspection of the KnAAPO workshops. For the first time in the plant’s history, students of the Moscow Aviation Institute are attend-ing comprehensive practical training as part of a program to attract young engineers to the Far East. Participating students have passed a rigorous selection process and will have a guaranteed employ-ment at KnAAPO after graduation. Special social programs and financial motivation tools have been developed to support this initiative. The future engineers told the Prime Minister about their useful prac-tical experience gained from real production at an aircraft manufacturing company that is among the leaders of the industry in terms of its level of technology and organizational culture.